CHVRCHES have a new song available! Hell. To The Yes.

As I imagined it’s just brilliant again. Sucks to anyone who missed out on tickets for their August show in Sydney, the supporting act was revealed and it’s fucking City Calm Down. That’s going to be one mentally obtuse night .

Yahoo! On The Road: Empire of the Sun & Gold Fields

I posted yesterday on a live streamed show featuring Empire of the Sun and Gold Fields from Dallas which was part of Yahoo’s On The Road live tour. If you managed to catch it, then you know as much as I do that we all witnessed something truly special. In the past, I’ve been a fan of EOTS, admittedly not as wild as I now am after seeing that amazing performance. But it was this show yesterday and this show only, that’s made me going completely insane in wait for their upcoming album, Ice on the Dune.

For starters, I’ll just remind readers that yesterday was a live show, streamed on Yahoo! Meaning it wasn’t actually live. That being said, I don’t think I’ve ever watched anything on YouTube or any other video streaming site where I’ve gotten lost in the experience so hard I could’ve sworn I was at the House Of Blues right in the middle of the mosh pit. It was, no joke, that amazing. Gold Fields of course didn’t disappoint (as they never in their career have), annihilating the premise of what people think about “support” bands and making this more of a double-headliner show. Sweeping through their debut album Black Sun with tracks like the re-worked already classics Treehouse and You’re Still Gone they looked a little uncomfortable on the strangely lit stage in front of punters that were clearly there from the beginning to see their precious Empire of the Sun. Not to worry, the Ballarat locals easily swayed their attention by the time they broke into their brilliant cover of Underworld’s, ‘Born Slippy’ and by the time they closed the set with Moves everyone was on board.

Now, like I said, I haven’t always been a massive fan of EOTS in the way that I know the lyrics to every single song. I have the album. I respect and liked to listen to the album. That being said, I was a stranger to a lot of the songs. This could be because they played a lot of the new album, or a consequence of my own musical ignorance. Regardless, it absolutely blew my face off from beginning to end. Empire of the Sun were inspiring to say the least from the moment they appeared on the sci-fi induced dream sequence that used to resemble a stage of sorts. They began the set with what sounded almost like an electronically enhanced glam rock introduction, burning through lines of lead guitar over and over with a lick that I kind of wanted them to play as many times of possible without moving on, it was that incredible an opening. There were fish-looking people in rubber suits and giant jelly-fish, with a weird ambient background that changed like the old-school Windows Media Player used to. Frontman Luke Steele is something to marvel at. He is a massive musical force, and that’s putting it lightly. His style, his vocals and his presence all come together to form something you can tell he truly believes in, like a method actor having trouble breaking out of character he makes you believe all of the weird fantasy novel dancers and psychadelic shit that’s going on in the background.

The show itself was absolutely amazing. Like if an amazing band just played in costume while cirque du soleil trained in full dress in the background. But it was the music that lifted it to the heights that it ended up reaching. Of course they played classics like We Are The People, Standing On The Shore and Walking On A Dream, but it was the new stuff that really stood out. The harsh reality of me writing this now is that I don’t know any of the names of the new stuff nor do I have access to be able to listen to it or stream it to any readers. But I can’t recommend any higher checking out the videos from the gig that are already up on Yahoo!

Empire of the Sun are playing at Sydney Opera House on the 28th of May as part of the Vivid Sydney Festival. Tickets are currently sold out but watch out for scalpers!

Watch the videos via the link below:

Empire Of The Sun – Alive

Empire Of The Sun – Walking On A Dream

Empire Of The Sun – Standing On The Shore

Empire of the Sun & Gold Fields: Live in Dallas

Click on the picture above to go through to the live performance!! It’s already epic.

Still hung out from your time at the discotechque this weekend? Well relax, friend. Phantogram are label-mates of the lovely Ra Ra Riot and just perfect for this exact situation. Cruisy and colourful, this film clip won’t jolt you into super serious week-time mode. But it will make the transition a lot more peaceful.

Don’t Fuck With My Money

It’s the name of the song. Simple concept. Aggressive. Funky. Enlightening. Fuck this song blows my mind. It gets the shoulders jiving and the feet tapping and it’s brilliant both vocally and musically.

Penguin Prison are the bomb diggity. It’s like if Jamiroquai wasn’t a complete tool and didn’t write shit music. I’m also quite embarrased that that’s the second time I’ve made a reference to Jamiroquai on my blog. I’m hanging my head in shame. But listening to this track that will be the only part of my body feeling down…the rest are cutting fast and loose on the impromptue dancefloor that is bound to open up once this song is started.

Could this be digital heaven? I believe RAC could perhaps be one of the finest remix artists of our generation. I mean, judge for yourself, but I really dig this simple, melodic take on remix that doesn’t necessarily have to go nuts with bass or breakdowns and thumping nonsense.

His choice of song is what really ropes me in. You can look at some of the examples below but I mean, what amazing taste. Tokyo Police Club, Kele, Phoenix, Foster the People, The Shins, The Temper Trap, TDCC, Ra Ra Riot, Chromeo, Classixx and the list goes on. Case closed.

Classixx are the smoothest 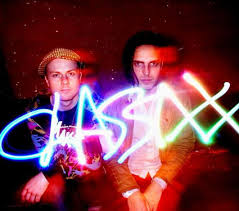 Listening to Classixx debut album, Hanging Gardens, is without a doubt one of the most therapeutic things I’ve ever done. In some parts it’s stress relieving in one of those aggressive, “letting your anger out” type ways and in others it’s like meditating to a sounds of the rainforest CD. From beginning to end, its a masterpiece of electronic melody only made better by the appearance of Active Child and Nancy Whang.

As I mentioned, you can picture this album being used for lots of different enjoyment based scenarios. Some tracks like All you’re waiting for could suit a night club pressing on 3am whereas other more stripped back gems like Borderline  (my favourite FYI) are more of a bath-tub and candles type beat (if you’re into that kind of thing). Either way, Classixx built up something for everyone and it’s definitely worth checking out a preview.

The album, Hanging Gardens, is up for pre-order now on iTunes HERE

…and as brilliant as ever! Their first album had a lot of my friends with no affection for sourcing out new music saying, “Who’s this??” and this song is just another push forward.

Can’t wait for the album. Magnetic is, well…magnetic.

These local boys are just getting better and better. I remember when I first saw them in late 2011 supporting Gold Fields at the Oxford Arts Factory in the heart of Sydney I thought they sounded a lot like Foals. Now, usually with those sort of bands I’m the first to call rip-off or something horrible (whilst enjoying the sound in the closet of course) but with Conics it was hard not to sound the horns and just talk them up completely. They won me over with their high-energy performance, funky bass lines and vocals that come off hollow at first listen until you get right into it and realise how solid they actually are.

Conics  are out with a new track that’s being picked up by all the Australian music blogs that matter and getting justified high praise. Their new tracks are definitely moving away from what I originally thought, giving them their own distinct sound that is extremely dance-able. This Moment is the debut track off their first EP, poised to be released in June. I’ll be checking them out for sure this Saturday when they play their second residency gig at the Oxford Arts Factory in Sydney.

Come down and see the magic for yourselves. For all you money grubbing cheap-o’s out there, its FREE, so no excuses.

Two posts in a row on Dale Earnhardt Jr. Jr! But I saw this live version of Party All The Time and tried to find a recorded one to no avail, only to find out apparently it’s an Eddie Murphy song…yes, that’s right, an Eddie Murphy SONG. Confusion ensued.

Those boys in the neon-patch covered blazers absolutely nailed it, whilst perfectly displaying the playful cheesiness of the eighties. I could only find rough live versions, but compare this funky number to Eddie Murphies recorded track and see what you think…should they have just waited a few years and let the professionals handle it?